Well into the second week of the latest COP meeting and certainty is as elusive as ever. An air of mystery around the negotiations is amplified by some prevarication in public by officials, no doubt due in part to the pressure of discussions going right down to the wire. Then, the vocabulary is mind-bending, even before we enter the technical issues.

Perhaps inevitably, there are cries of ‘greenwashing’, with accusations and reports detailing backsliding over reductions in emissions. All is not, it seems, as straightforward as a pledge to abandon polluting ways by a given date.

By contrast, the clarity of the faith-based organisations’ (FBO) approach has been illuminating. In press conferences and a meeting in the spirit of the Talanoa Dialogue the organisations have shouldered the moral responsibility to speak up for the vulnerable and for the Earth, urging comprehensive action for what is termed “the great transition”.

The Dialogue, held as the Conference was about to open, was a forum for discussion of a range of issues by participants present at the venue – the community hall of a Coptic Church in Sharm el-Sheikh - and following online. Brahma Kumari Valeriane Bernard, co-chair of the Interfaith Liaison Committee and moderator for the Dialogue, said:

“It gives us the opportunity to reflect, talk deeply together and exchange views on all the different components of climate justice: human rights, gender, loss and damage, adaptation, migration, the design of adequate finance mechanisms, and the wisdom of indigenous people. We also take time to pray, meditate and contemplate together.”

The interfaith Liaison Committee hosted a Talanoa dialogue at the beginning of COP27 in Sharm el-Sheikh Egypt, to bring together people fo faith to discuss key issues relating to climate justice, and then to pray together on November 6, 2022.

The outcome, a written statement or Call from the Talanoa Dialogue was then delivered to Owais Sarmad, Deputy Executive Secretary of the UNFCCC. Highlighting the need for “new narratives” to act against a short-term approach and damaging models of economic growth, it urges “a just transition for climate justice.”

At a press conference, leader of the BK delegation at COP27, Maureen Goodman (below; image Albin Hillert, LWF) said FBOs have a responsibility to help build trust with politicians – and thereby change the way politics is conducted – and to both educate people at the grassroots and communicate their needs.

“The Call is important because it is the way faith communities can be heard by the UNFCCC,” she commented later “Faith communities reach out to a huge percentage of the world’s population – 84% subscribe to a faith, and 94% in Africa. It’s vital that the voice is heard.”

6 November 2022, Sharm El-Sheikh, Egypt: Maureen Goodman (Brahma Kumaris) shares a word of reflection as religious leaders and representatives of ecumenical organizations gather for a Talanoa dialogue at the eve of COP27 in Egypt. The dialogue seeks to address how faith-based communities can contribute to the work to address the evermore urgent climate emergency, and in 2022 is held at Qesm Sharm Ash Sheikh, or The Heavenly Cathedral, in Sharm el-Sheikh, Egypt, home to congregants of the Coptic Orthodox Church.

The issue of representation has arisen once again at this COP meeting, with some civil society organisations arguing they have been left out in the cold, and attention being drawn to the increase – by 25% over Glasgow last year – of representatives of the fossil fuel industry. Certainly, the crowds seem thinner this year… (image: Albin Hillert, LWF) 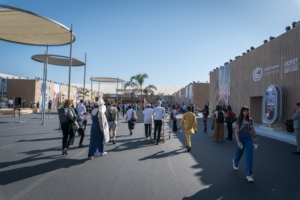 If fossil fuels have underpinned the prosperity of one part of the world over the past 250 years, only a minority of the population has benefited. By contrast, faith organisations can justly say that, together, they represent billions.

Not surprisingly, then, a press conference on practical initiatives taken by FBOs to curb climate change revealed impressive action on a global scale.

Valeriane, who is NGO representative of the BKs to the UN, Geneva, outlined the simple way of life and vegetarian or vegan diet of the BKs, based on respecting and serving Nature. She highlighted their commitment to renewable energy, with major solar power projects in India, to sustainable yogic agriculture, also in India, and to water conservation in the arid region of Rajasthan.

Such commitments to environmental action are repeated across faiths and regions, from carbon tracking in Anglican churches in California, to training for Moslem clerics in Indonesia to help push back against deliberate burning of forests.

Susan Hendershot of Interfaith Power and Light in the US said that a campaign of advocacy by faith organisations had contributed to the passing of the Biden administration’s Inflation Reduction Act, providing major investment in environmental protection. At the local level, voters were urged this year to pledge to cast their vote according to their values, with the environment at the forefront.

Calls for changes to international law

There is, meanwhile, a growing movement for changes in international law that would provide a legal framework for enforceable environmental protection.

One, the proposed law of ecocide, would extend the provisions of the Rome Statute to include ecocide alongside crimes such as genocide. The other, a Fossil Fuels Non-Proliferation Treaty (NPT), would address the expansion in fossil fuels exploration and extraction that is continuing apace – especially in Africa.

This was perhaps the most extraordinary revelation of the past few days at COP27. A report from German NGO Urgewald, published this week, documents a new ‘scramble for Africa’, with European and American energy companies, banks and investment managers involved in massive expansion of the sector for their own benefit, even as the developed world offers loans for decarbonisation.

As Father Edoardo, representative of the Laudato Si movement, said, the NPT is essential, because there needs to be “an enforcement mechanism”.

This report includes: Youth and future generations day The...

Peace Drops for the Great Green Wall a Meditation...

This first report from the BK COP team includes:...